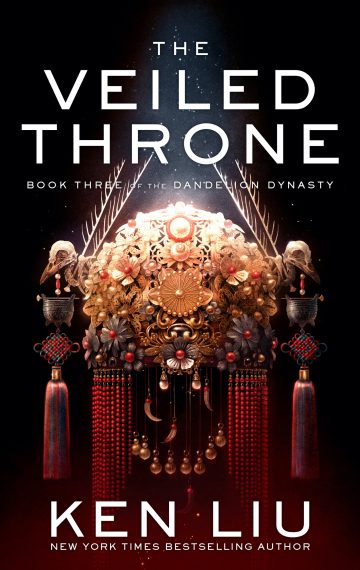 Princess Théra, once known as Empress Üna of Dara, entrusted the throne to her younger brother in order to journey to Ukyu-Gondé to war with the Lyucu. She has crossed the fabled Wall of Storms with a fleet of advanced warships and ten thousand people. Beset by adversity, Théra and her most trusted companions attempt to overcome every challenge by doing the most interesting thing. But is not letting the past dictate the present always possible or even desirable?

In Dara, the Lyucu leadership as well as the surviving Dandelion Court bristle with rivalries as currents of power surge and ebb and perspectives spin and shift. Here, parents and children, teachers and students, Empress and Pékyu, all nurture the seeds of plans that will take years to bloom. Will tradition yield to new justifications for power?

Everywhere, the spirit of innovation dances like dandelion seeds on the wind, and the commoners, the forgotten, the ignored begin to engineer new solutions for a new age.

Ken Liu returns to the series that draws from a tradition of the great epics of our history from the Aeneid to the Romance on the Three Kingdoms and builds a new tale unsurpassed in its scope and ambition.

Praise for The Veiled Throne

But ultimately, it’s Liu’s poetic style that makes this book so memorable: “We are embedded in strands of love and hatred, a web that glows in the sunlight of history, bedecked in pearls of blood and fragments of bone.”

This is a shelf-bending fantasy masterwork: as good as it gets.

Liu’s world is lively, fluid, and above all, original, populated with nuanced characters, mighty flying lizards, sentient narwhals, and living books. Wooden submarines, large scale shadow puppet plays, and airships made of bamboo and silk powered by “silkmotic force” add to the dazzling atmospherics as Liu mixes the drama of heroic wuxia battles with twisty intrigues and the characters’ ever-shifting priorities, balancing each element to create the epic feel of real history.

There’s Liu’s voice to hold onto, though — beautifully deployed here and fully in command of the language of his imaginary universe. He balances his digressions with grounded emotion, relationships that develop and change over time, small moments — an inside joke, an unlikely friendship, smells and sounds rendered in loving detail — that root his action and diversions in the extremely personal.

For audiobook listeners, it may be helpful to have the list of major characters around as reference. I’ve reproduced the one from the print version here.